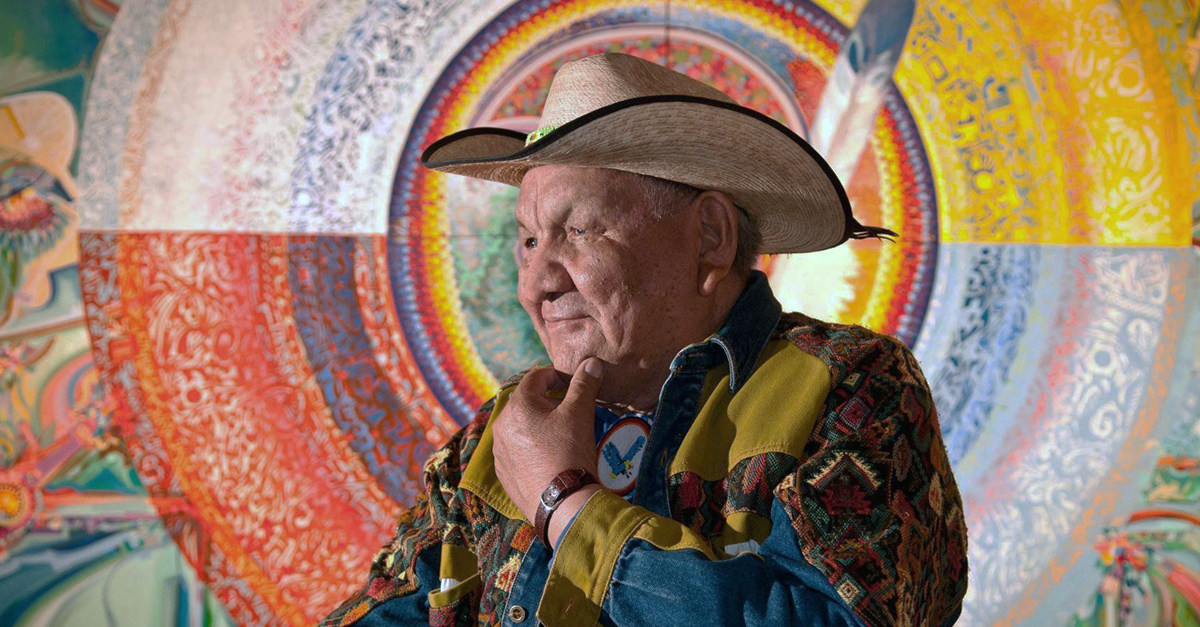 –
Alex Janvier, Denesuline, from the Cold Lake First Nations, Treaty 6 Territory, has been a professional artist for several decades. Janvier is renowned for his distinct curved lines and use of bright color combinations. His unique abstract style and his artistic ideas have blazed the trail for many First Nations and Canadian Artists.

Janvier is multi-talented, creating Original Works of Art in many different mediums throughout his career. Numerous magnificent and distinct Janvier murals adorn public buildings across Canada. In 1993, while painting the magnificent “Morning Star” in the Canadian Museum of Civilization, he was nicknamed “Alexangelo”. Two other notable public commissions include “Tsa Tsa Ke K’e” or “Iron Foot Place” at the Roger Place in Edmonton, Alberta, and the diptych, site specific installation of “Sunrise” and “Sunset” at the Legislative Assembly of Alberta.

Starting in 1964, numerous galleries have exhibited Janvier paintings in solo and group shows, both nationally and internationally. In 2012, the Art Gallery of Alberta hosted a major exhibition of over ninety paintings, including very large canvas originals and works that were shown to the public for the first time. One of Alex’s highest achievements was his solo travelling exhibition titled “Alex Janvier: Modern Indigenous Master,” that was curated by the National Gallery of Canada in 2016-2018.

Alex is the recipient of many prestigious awards including the Distinguished Artist Award (2017), the Order of Canada (2007), the Governor General’s Award in Visual and Media Arts (2008), the National Aboriginal Lifetime Achievement Award (2002), the Marion Nicoll Visual Arts Award (2008), and the Alberta Order of Excellence (2010). In the past decade, he has also been acknowledged with several honorary degrees from educational institutions across Canada including the University of British Columbia, Norquest College, Ontario College of Art and Design, Blue Quills First Nations College, the University of Calgary, and the University of Alberta.

Although Alex is known internationally as an artist, he has a very humble approach to life. He is grateful to be able to paint full time for it is what he loves to do. His paintings are full of culturally significant themes and history, sometimes recording the pristine beauty of our Mother Earth. The magnitude of spirituality in his paintings will keep his art alive for many centuries yet to come.

error: All images, content and texts are property of Alex Janvier. Please contact us if you wish to use any images.